This compendium attempts to provide a sufficent summary of the most important concepts of the course. This compendium is written by students for educational purposes and is largely based on the course book and the lecture slides of 2018.

The compendium is not written by professionals, so there are bound to be errors. If you spot any such errors, feel free to correct it. If you feel like something important is missing from the compendium, feel free to add it yourself.

This chapter attempts to explain what the course is all about and throws a bunch of new terms and concepts that will be further explored in the following chapters. In this chapter we will give you the most central concepts (the ones that has been asked about in previous exams) and provide an explaination of some of them.

This course is all about evaluating the dependability and/or performance of systems so it makes sense to start out with clarifying what that entails.

System
A system can be defined as a regularly interacting or interdependent group of items forming a unified whole.

Basically a system can be anything that does anything, as long as there are several components working together to peform some sort of funciton.

A system can be described by two types of characteristics: functional and non-functional properties.

When evaluating the dependability and performance of a system, we often don't want to use the actual system for the evalutation. Instead we use a model of the system.

Model
A model is an abstraction of the real or projected system.

A model is in simpler words: A simplifcation of the real system. There can be several reasons for using a model. Developing a model is most likely a lot less constly than building the actual system, and by analysing the model is is possible to discover problems, that could have been costly to fix if the system was already built. Another reason can be simplicity. Properties of a system can sometimes be difficult to handle or measure. By building a simpler model, these properties can be studied in a controlled manner. When using a model it is important to know that the results derived from the model should be valid for the real system, not just for the model.

A system has three basic properties:

The book continues to introduce concepts that are required for understanding the concepts later on in the coruse, so here it goes:

Quality of Service (QoS)
Degree of compliance of a service to the areement that exists between the user and the provider of the service.

Basically: Does the system live up to my expecations? How well does it do that?

Dependability
Trustworthiness of a system such that reliance can justifiably be placed on the service it delivers.

Basically: Can I trust that system works correctly when using it?

Failure
Deviation of the delivered service from the compliance with the specification. Transition from correct service to incorrect service (e.g the service beomes unavailable).
Error
Part of the system state which is liable to lead to a failure.
Fault
Adjudged or hypothesized cause of an error.

These three concepts together are the threats to dependability. They are connected like this: A fault causes an error and an error may lead to system failure. There two basic appoaches to achieve a dependable system:

Fault prevention
To prevent the occurence or introduction of faults.
Fault tolerance
To prevent that errors cause fialures or, in other words deliver a correct service despite the presence of faults.

There are several types of faults, these are the most important to know:

Physical faults
These are the "classical" faults, e.g physcial wear out of components.
Transient faults
These faults are present only for a short period of time and physical change occurs in the system, e.g. external disturbances like electromagnetic interference and radiation.
Intermittent faults
These faults come and go, for instance due to hardware components operating close to its tolerance limit, e.g. a gate that receive only sometimes (and not always) a satisfactory signal level.
MTFF
Mean Time to First Failure
MTCF
Mean Time to Catastrophic Failure
MTBF
Mean Time Between Failures
MUT
Mean Up Time
MDT
Mean Down Time
MTTF
Mean Time To Failure

The last major definitions related to dependability are:

Performance also has several definitions and concepts we must understand so bear with me:

Performance
Abiliy of a system to provide the resources needed to deliver its services.
Capacity
Maximum load a syste mcan handle per time unit.
Carried traffic
Average number of resources in a time interval. Measured in Erlang.
Primary traffic
Traffic generated by the users.
Secondary traffic
Traffic used for signalling between network nodes.
Time Congestion
The Fraction of tiem all resources are busy.
Throughput
Portion of the system capaciy that is utilised be the users.
Delay
Time it takes to complete a service.
Waiting time
Accumulated time a service request is pending for service in a system.
Service time
Accumulated time a servide request is served by a system.
Sojourn time
Total time a service request is in a system.

There are three primary ways of analysing a system: Mathematical analysis, simulation and measurement on a prototype of a system. Here are the main benefits of each of them:

Mathematical analysis
In the case of well-known problems, results can easily be obtained using formulas or algorithms.
Simulation
Relatively detailed models can be used.
Measurements on (a prototype of) a system
Results are trustworthy, realistic and detailed.

This chapter is just plain statistics and should be familiar if you have taken a statistics course. We will thus not prioritise this chapter, and we suggest you look at alternative sources if you need to brush up on your statistics knowledge. Do feel free to add material to this chapter yourself if you so desire. Erlang -k distribution probability density function (k is shape and λ is rate of each phase):

This chapter introduces some applied statistics in the context of the course.

There are 4 main methods

Simulation can be classified as static or dynamic, discrete or continuous, and deterministic or stochastic.

In this course we use dynamic, discrete, and stochastic simulation models.

State variables change only at discrete set of points in time.

Event driven: Variable time-stamp. For example: Move the clock to the time of next event.

Attributes: Properties of an entity.

Event notice: A record of an event to occur.

A Process describes the behaviour of an entity (sequence of activities, life cycle). Focus on the entities and their dependencies and interactions (object-oriented approach). Event-driven approach. Requires a list of events and synchronization mechanisms. 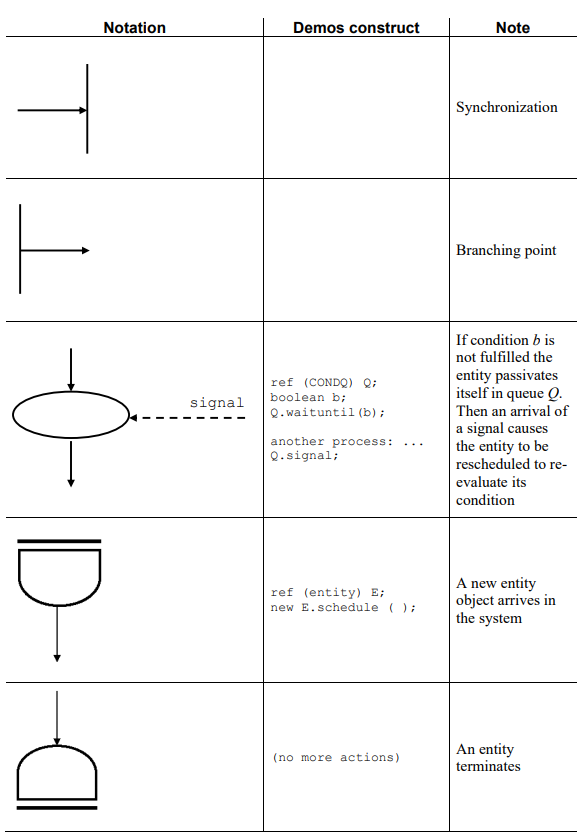 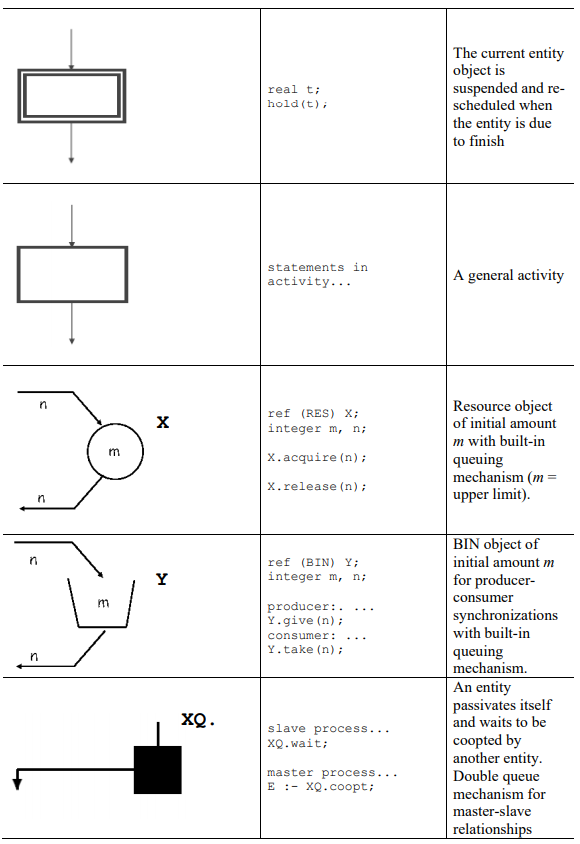 This chapter presents the Poisson process and its properties. In particular, it describes how Poisson processes can be aggregated to form Markov processes that are an important part of Markov models.

Poisson distribution: Number of events until and including time t.

Mobile phone subscribers share a limited number of radio transmitters/receivers in a mobile base station.

A system does not need to have any queuing positions to be classified as a queuing system.

A queueing system is characterized by the arrival process, service time distribution, number of servers, maimum number of customers in the system, number of sources, and queuing dicipline (service order).

Software faults are the most common couse of failure in ICT systems.

Transient fault
A fault that is only present in the system for a short time.

Use of modeling in development and dimensioning.

Point process - Point process describes occurrence of an event - No gradation of type of event - The state, X(t), of a process is the number of events, N(t) Regular point process only one event at a time.

Erlang: Erlang is a dimensionless unit that is used as a measure for offered load or carried load from service-providing elements. Often expressed as call arrival rate times average call length. Given a scenario with a single cord in telephone system. The cord can provide phone calls for 60 minutes per hour. A full utilization of the cord results in 1 erlang. If users now attempts to make calls in this system (measured in eg. per hour): Carried load is the traffic that was carried for the successful call-attempts. Offered load is the traffic that would have been carried if all the call-attempts succeeded.

Offered traffic (in erlangs) is related to the call arrival rate, λ, and the average call-holding time (the average time of a phone call), h, by: provided that h and λ are expressed using the same units of time (seconds and calls per second, or minutes and calls per minute).

Joint probability: The probability that both events occurs in conjunction (Intersection)

Negative exponential distribution: X ∼ Exp(λ) where is the rate parameter

Erlang-k distribution: It is the distribution of the sum of k random variables identically distributed. X ~ Erlang-k(λ) Der

Poisson distribution: Corresponds to the binomial distribution with an infinite number of Bernoulli trials. Probability of the number of occurrences of an event, given that it occurs on average at the intensity X ∼ P(α) 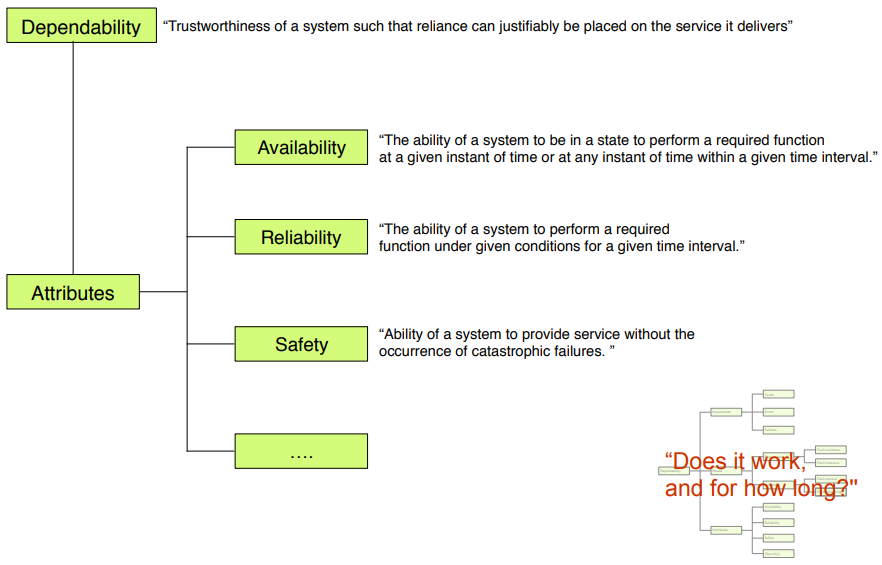 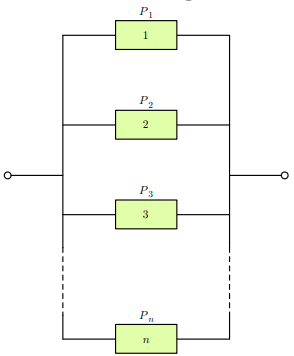 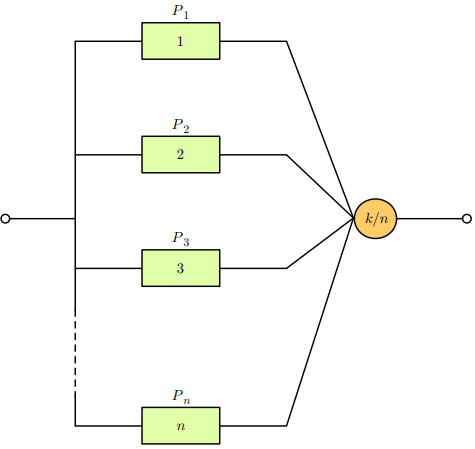 For a system that cannot be repaired and a structure of independent elements with constant failure rate .

How to improve system availability: