The software architecture of a system is the set of structures needed to reason about the system, which comprises software elements, relations among them, and the properties of both.

TDT4240 is a very interesting subject. The main project in this subject is about making a simple multiplayer mobile game. To prepare for the exam you need to learn how to design software architectures in detail. The book is recommended since it is very understandable and most of the figures in the presentation slides are taken from the book. You can test some of your knowledge in this subject at Ace Education (a free application made by NTNU students): http://aceweb.herokuapp.com

This means the architectural patterns are at a higher level than the design patterns.

Why is Software Architecture important?

An architectural pattern is a composition of elements to solve particular problems. It defines the element types and their forms of interaction used when solving the problems.

Shows a set of code or data units that has to be constructed or procured.

Software is divided into layers that can be developed simultaneously. Layers are always drawn as a stack of boxes. All layers can use the public interfaces of the other layers (layer bridging).

The element type is elements that have runtime behaviour(components) and their interactions(connectors).

We want a way to keep the user interface separate from the application's functionality. We divide the software into a model with the application data, a view that displays it and a controller that manages the notifications of state changes. Software needed is supposed to transform streams of data multiple times. The solution is a pipeline with filters, altering the data in the correct order.

Shared resources and services need to be easily accessed and we have a large number of clients. Clients request services from servers. Note that some components can be both clients and servers.

When we have a set of distributed computational entities that are equally important, peer-to-peer (aka P2P) really shines. Peer-to-peer is typically a request-reply system. A peers search for another is often directed through peers in the middle, thus forming a swarm. An often well-known example is bittorrenting where peers share files with one another, often used for piracy.

A service provider needs to provide easily accessible services for its users. The consumers don't need to know anything about the implementation. Components have interfaces that describe the services they provide. Often multilanguage.

Components work together via announced messages or events, using an event bus. Components may subscribe to a set of events. Any component may be both publisher and subscriber.

NOTE: In Publisher/Subscriber - because of the event bus in between - components are loosely coupled as opposed to Observer pattern.

Shared data between multiple data accessors and shared data stores. The connector enables data reading and writing to these stores.

Satisfies the need to quickly analyze enormous volumes of data. Often sorting data and then analyze is insufficient. The map-reduce pattern needs specialized hardware for parallelization, and the functions map and reduce.

Describes how to distribute and allocate the components of a system in distinct subsets of hardware and software, connected by some communication medium. This pattern specializes in the generic deployment (software-to-hardware allocation) structure.

A class is only instantiated once and can be changed by everyone. The constructor is private, so the object will only be created inside the class. It is important that we can retrieve the instance created from outside the class. A singleton pattern is not necessarily optimized for multithreading.

Is used to encapsulate a set of objects, so that you can use them without having to specify the exact class of each object It can be done by either defining an interface, implemented in the child classes, or it can be defined in one class and overridden in the derived classes.

Here we encapsulate multiple factories made based on the factory pattern in a complete abstract factory.

TODO: explanation needs to be simpler 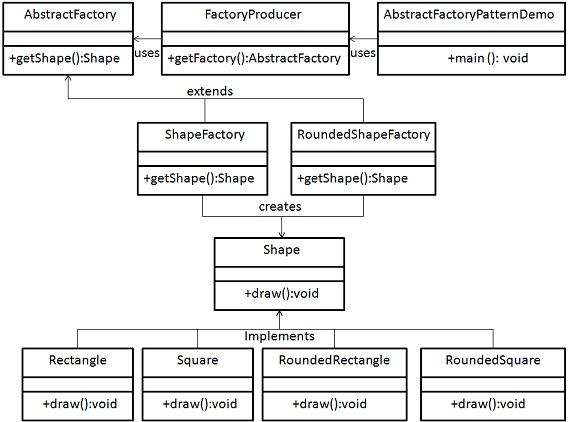 An example is an abstract GUIFactory, which can create different buttons through factories. The buttons are different, but the developer can work with them as they're all equal, through a more general type button than the specific buttons.

The observer pattern relies on an observer that gets its information from a subject and notifies its subclasses to update their state. This differs from the model view controller which is an architectural design, system-wide pattern.

Example: a program taking an integer and presenting it in different numeral systems. A subclass notifies the observer that an integer has been entered, the observer notifies all subclasses, in our example the octal, binary, and hexa- classes. Then they update their state accordingly.

The initial state is set to NoCard. In this state insertCard() would change the state to CardInserted, removeCard() and enterPin() would not do anything in this state, as there is no card.

Methods for balance and withdrawal could be part of the interface and should probably return error messages if not in the PinEntered state.

In java term (might want to generalize this a bit more), we have an abstract parent class thus it cannot be instantiated. It is extended by child classes inheriting its properties.

Testable property of a system to tell how well the system is satisfying the needs of the stakeholders. The attributes hold three types of categories:

It refers to the property of software that is there and ready to carry out its task when it is needed. It encompasses both reliability and dependability.

This means that availability is about detecting and preventing faults, but also recovering from them. The book points out that one could say "failure is not an option", but that it is a lousy design philosophy as it would not work in practice.

The term "high availability" typically refers to "5 nine"-availability (99.999 % availability) or higher, which translates to 1 minute and 18 seconds of downtime over 90 days, or 5 minutes and 15 seconds over a year.

The goal of these tactics is to mask or repair the fault. Interoperability is about the degree to which two or more systems can usefully exchange meaningful information via interfaces in a particular context.

A system cannot be interoperable in isolation. They can interoperate in indirect ways.

Reasons you would want interoperability in your system:

These reasons give us two important aspects of interoperability:

One also has to manage available interfaces. Four questions to consider when planning for modifiability: A parameterized function is more general than the similar function that assumes . When we bind the value of some parameters at a different phase in the life cycle than the one in which we defined the parameters, we are applying the defer binding tactic.

You'll want to bind as late as possible, so a change will only mean a change of argument, not the inner workings of a module. Measures a system's ability to protect data from those who are not meant to have access, while still giving those who are authorized access.

Other characteristics used to support CIA:

One method of thinking about how to achieve security in a system is to think about physical security. To what degree the system is testable. Used to demonstrate faults.

You'll want to plan for testing in the project plan, as it is very important for systems, especially big ones. You'll want a testing infrastructure that makes it easy to test, to introduce tests and mimic faults to see if the system can handle them. The infrastructure should also enable logging system states. You'll also want these to run automatically with development cycles/increments. Usability is concerned with how easy it is for the user to accomplish the desired task and the kind of user support the system provides.

Over the last few years, this has become increasingly important, as users don't want to use (or buy) systems which are hard to use. An architectural pattern - is a package of design decisions that are found repeatedly in practice, - has known properties that permit reuse, and - describes a class of architectures.

Patterns are discovered, not invented.

An architectural pattern establishes a relationship between:

This {context, problem, solution} form constitutes a template for documenting a pattern.

An architecturally significant requirement (ASR) is a requirement that will have a profound effect on architecture. ASRs can be extracted from a requirements document, captured from stakeholders in a workshop such as a quality attribute workshop (QAW), or derived from business goals.

What are the relevant views? That depends entirely on your goals.

Module structures describe how the system is to be structured as a set of code or data units that have to be constructed or procured.

Component-and-connector structures describe how the system is to be structured as a set of elements that have runtime behavior (components) and interactions (connectors).

The purpose of the C&C views is to show how the system works, guide development by specifying structure and behavior of runtime elements and help reason about runtime system quality attributes, such as performance and availability.

CBAM stands for Cost Benefit Analysis Method. It uses a set of scenarios, whereas ATAM uses one and one scenario. CBAM varies the values of the Response Measure, to create full.

The CBAM process consists of the following nine steps:

Architecture in the cloud (Chapter 26)

Architecture for the edge (Chapter 27)

This should be updated every year. This is from 2015:

The second and third one could be brought to the exam.

"Game Architecture and Design - A New Edition", Rollings and Morris

Steps of creating a game architecture

Meant to give some guidelines to those who develop, design, oversee, evaluate, describe, etc. computer systems.

Introduces a conceptual framework, or frame of references, for architectural description. Describes how you select views based on stakeholders and requirements. Description of the different stakeholders and their roles.

It goes on to explain some terms. These explanations have been placed in the introduction to this Wikipendium-article.

Goes on to describe practices in the architectural documentation (AD). Each of these points is explained in detail. Overview of the views:

The article includes the notation, notion, and examples of each view.

The article goes on to point out how all the views are in some way connected and are not independent of each other. They describe how this is. It also describes how you can tailor this model for your project.

Starts by explaining what a pattern is (see the introduction of this article), and where software patterns come from. This is also the subject of the article. It introduces a few terms, which are explained below. A great read if you're unsure of what patterns are.

The last two pages describe the pattern "Type Promotion" of C++ on the Alexandrian form, cast from an idiom.